The overall protection of the rhinos remains an in-the-field situation. The park has to remain one step ahead of the poachers, thus the purchase of specialised equipment will always be needed as well as continually training new field rangers and giving refresher courses and new skills to old hands. Fundraising for specifically for rhino protection is an ongoing project that the PWT has been involved with for many years, and will continue to support going into the future.

There are various ways to assist the PWT in raising funds for this project and we urge you to please contact the PWT to find out how! When making a donation towards the rhinos please state so on your payment reference!

Prior to 2008 poaching of rhino was still present but on a much smaller scale. Since 2008 to date the numbers have escalated to proportions whereby the the new births of rhino per annum will soon be less than the numbers of rhinos poached if drastic measures are not put into place. This is the beginning of the road to extinction. These precious animals, who are so trusting and innocent, are relying on us to protect them from this onslaught. Rhino protection has become the PWT’s primary conservation project in Pilanesberg until we can stop this awful situation.

At the turn of the 19th century, there were approximately one million rhinos. In 1970, there were around 70,000. Today, there are fewer than 24,500 rhinos surviving in the wild.

Three of the five species of rhino are “Critically Endangered” as defined by the IUCN (World Conservation Union). A taxon is classified as critically endangered when the best available evidence indicates that it meets any of a range of pre-determined criteria. It is therefore considered to be facing an extremely high risk of extinction in the wild. The southern subspecies of the white rhino is classified by the IUCN in the lesser category of being “Near Threatened”; and the Indian rhino is classified as “Vulnerable”. Even this is considered to be facing a high risk of extinction in the wild.
In 2022, some of us are lucky enough to be able to travel to Africa and Asia to see them in the wild. In 2032, will our children and grandchildren have this same privilege?

Rhinos have been around for 50 million years

Rhinos have been an important part of a wide range of ecosystems for millions of years; we must not let them join the dodo in extinction.

Humans have caused the drastic decline in numbers

Poachers kill rhinos for the price they can get for the horns (used for traditional Chinese medicine and for ornamental dagger handles in Yemen); land encroachment, illegal logging and pollution are destroying their habitat; and political conflicts adversely affect conservation programmes.

Rhinos are an umbrella species

When protecting and managing a rhino population, rangers and scientists take in account all the other species interacting with rhinos and those sharing the same habitat. When rhinos are protected, many other species are too; not only mammals but also birds, reptiles, fish and insects as well as plants.

By focusing on a well-known animal such as a rhino (or, to use the jargon, a charismatic mega-herbivore), we can raise more money and consequently support more conservation programmes benefiting animal and plant species sharing their habitat.

Rhinos are the second-biggest living land mammals after the elephants. Together with lion, giraffe, chimpanzee and polar bear, the rhino is one of the most popular species with zoo visitors. In the wild, rhinos attract tourists who bring money to national parks and local communities. They are one of the “Big Five”, along with lion, leopard, elephant and buffalo.

Protecting and managing a rhino population is a real challenge that costs energy and money. Rhino-range countries need our financial support, and benefit from shared expertise and exchange of ideas.

We know that conservation efforts save species. Pilanesberg is home to both the Southern White and Black Rhino species. The Southern White Rhino would not exist today if it were not for the work of a few determined people, who brought together the 200 or so individuals surviving, for a managed breeding and re-introduction programme. In 2021, South Africawas home to some 18 000 Southern White Rhinos, and 5 600 Black Rhinos. With more money, we can support more programmes, and not just save rhino populations, but increase numbers and develop populations. The Northern White Rhino subspecies may just have become extinct, but it is not too late to save the rest.

Not just that, but how many people know that rhinos also live in Asia? Or that two species have just one horn? Or that the horn is not used as an aphrodisiac? We have even heard some people say that they are carnivores! If people do not know about these amazing animals and the problems they are facing, how can we expect them to want to do something to help save rhinos?

We all have an opportunity to get involved!

You can help us raise awareness of the plight of the rhino! The more we do all together, the more people will learn about rhinos and the more field projects we will be able to support. There are lots of fundraising ideas scattered in the ‘Fundraising’ section, as well as ways to donate directly to save the rhino in Pilanesberg.

This is perhaps one of the most critical rhino protection initiatives in Pilanesberg. Without these rangers, the actual boots on the ground, rhino conservation and winning the fight against poaching would be impossible. The PWT supports the RPU in Pilanesberg by providing funding/sourcing donations for the following: 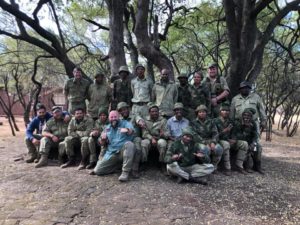 The Bat Hawk was introduced to Pilanesberg in 2016 as an addition to the anti-poaching efforts. This little aircraft has become an invaluable asset to the RPU. She is flown across the park on surveillance missions twice a day, scouting the various sections for suspicious activity, carcasses, abandoned calves, and anything which seems out of the ordinary. This amazing project is sponsored by Copenhagen Zoo, who fund the project in it’s totality. This includes the purchase of the aircraft itself, servicing and maintenance, fuel, insurance, the maintenance of the hanger, and salaries for the pilots who fly her. The Pilanesberg has had three individual aircraft since the start of this project. Each aircraft has a set number of hours during which it can be used for this application; once this limit is reached, the engine requires an overhaul or the plane has to be replaced (whichever lands up being the most cost effective). 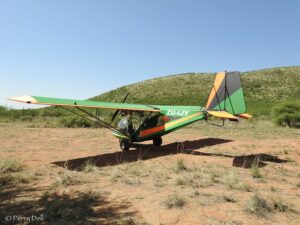 Serate – the inaugural bat hawk in Pilanesberg, flew from Dec 2016 to March 2018 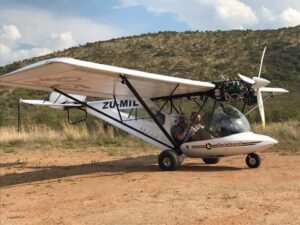 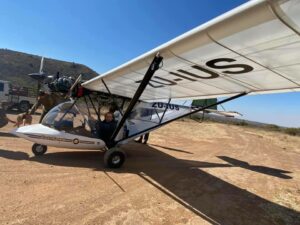 Ikaneng – the new girl in town, began flying in July 2021

At present the focus is on creating a database of information on each rhino within the Park. To increase our knowledge of rhinos, the park uses a technique of “notching” where a specific pattern is cut into the ears which enables ground monitors to individually identify that animal, who it is with, where it stays, and other biological data such as birth intervals. At the same time DNA is collected as part of the National Rhino Project that analyses and stores this data that can be used as evidence in the case of rhino poaching.

The PWT offers these notching events as experiences to members of the public and corporates. They are great as team building events, birthday, and event celebrations. You will not only be able to participate in a once-in-a-lifetime experience, you will also be directly contributing to the survival of ‘your rhino’ and all others within Pilanesberg. For more information on our notching experience, please click on the button below to visit our dedicated Notchings Fundraising page.

The PWT has provided funding for a number of AI and technology-based anti-poaching measures, many of which cannot be discussed publicly for safety reasons. One of the items which has proven very useful is the AI Bush Cameras; which are satellite-based cameras, and the SIM cards for these are sponsored by Vodacom.

TRO is another outstanding non-profit organisation who takes in orphaned rhino calves and raises them with the objective of eventually releasing them back into the wild rhino population. The PWT has a partnership with TRO, and they treat and raise the orphaned rhino calves which are rescued in Pilanesberg. In March 2022, a miracle baby was born to a female rhino who was rescued as an orphan after her mother was poached and killed for her horns. This female was raised and eventually released into a secure reserve, and she has now had a baby of her own!

For more information on the vital work they do, please visit their website: The Rhino Orphanage.

To donate to the rhino conservation and protection efforts in Pilanesberg, please click on the Donate Button below.